What makes
watercress so special

Watercress is one of the most nutrient-dense of all foods, as measured by the Aggregate Nutrient Density Index (ANDI), which means that one of the most flavorful greens you can eat delivers a potent portion of health benefits. Additionally, watercress is a naturally low calorie, fat free, cholesterol free, and very low sodium food.1

Watercress is a good source of vitamin A, an essential vitamin necessary for normal vision, skin health, and maintaining immune function.2

Watercress is an excellent source of Vitamin K, which forms and strengthens the bones and limits neuronal damage in the brain.4

A growing body of evidence suggests that watercress earns its "superleaf" title in large part because it may help prevent the spread of cancer cells.
Watercress is a cruciferous vegetable, which are generally known as cancer-fighters due to their high levels of phytochemicals known as isothiocyanates. Though this family of vegetables can help stop the spread of cancer cells, studies have shown that watercress specifically is associated with a reduced risked of several cancers. For example, in a University of Pittsburgh Cancer Institute Study, watercress appeared to stop human prostate cancer cells from growing in mice.
Frequent consumption of watercress is also associated with a reduction in DNA cell damage and an increase in antioxidant activity in the body, both of which may help fight cancer, according to research published in The American Journal of Clinical Nutrition.

Watercress is the superhero of leafy greens and should be incorporated into daily diets. For ideas on how to eat more of this cancer-fighting vegetable, click here.

Watercress scores highly on the Antidepressant Food Scale because it contains many of the necessary Antidepressant Nutrients. For example, gram for gram it contains more folate than a banana and more Vitamin C than an orange. What’s more, it’s a rich source of iron and, unlike many plant irons, the body can easily absorb its iron. This is because vitamin C promotes the absorption of plant iron by converting it into the same form as is found in meat and which the body can easily absorb. The high level of Vitamin C in watercress means that it is a rare green leaf with good iron availability. This alone should move it to the top of the shopping list particularly for the growing number of vegans and vegetarians who must source their iron from plants.

Watercress blows other foods out of the water when it comes to taste and nutrition. See how watercress stacks up against the top 10 items on the Aggregate Nutrient Density Index (ANDI), which was developed by Joel Fuhrman, MD.

To determine the ANDI scores, Dr. Fuhrman ranks the nutrient value of many common foods based on how many nutrients they deliver to your body for each calorie consumed. The ANDI scores are based on thirty-four important nutritional parameters and foods are ranked on a scale of 1 to 1000. 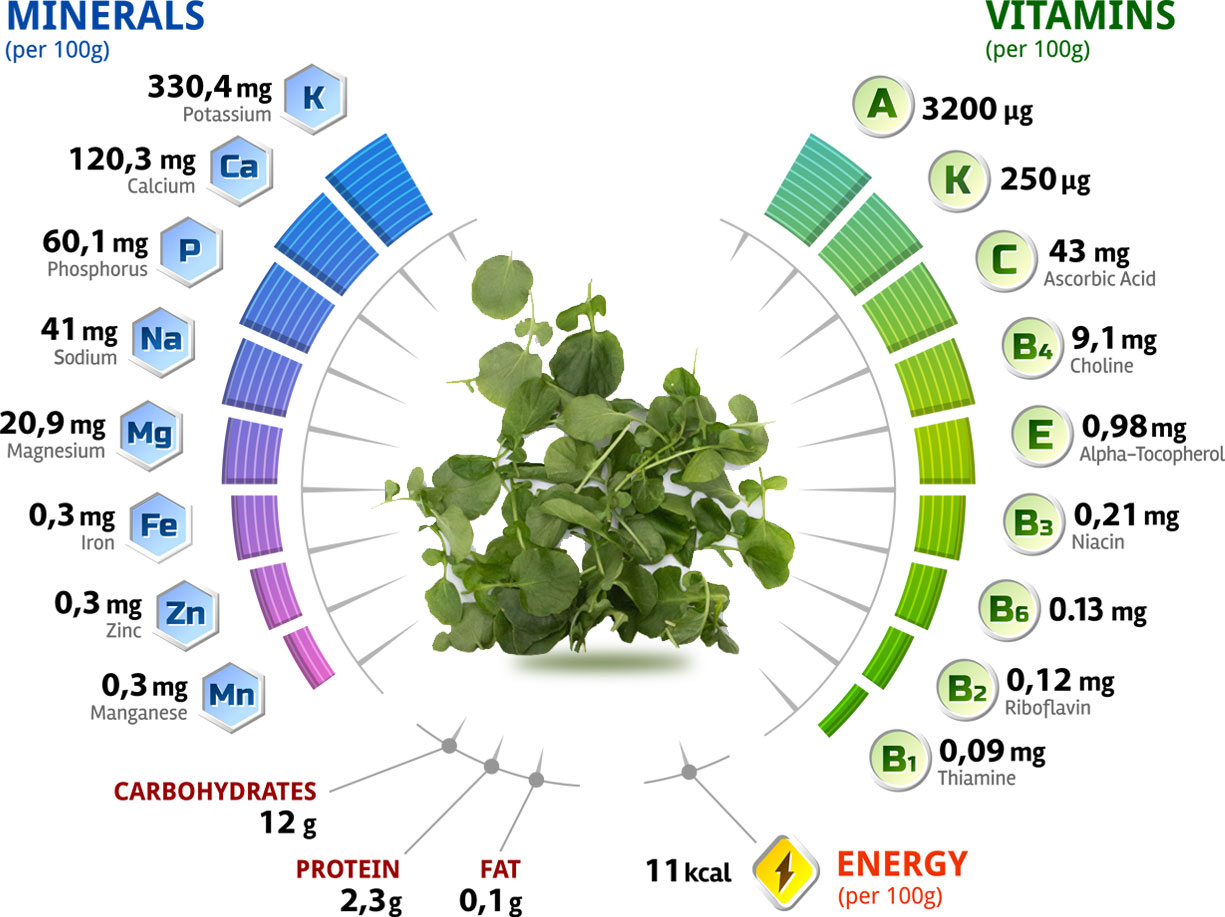 For more information about the ANDI
scale and to see the complete list.

Evidence shows watercress has a multitude of potential health benefits, including antimicrobial properties, may aid some chemotherapy treatments to prevent the growth of and induce the death of cancer cells, may help reduce inflammation and have cardio-protective effects through its high antioxidant content. Browse some of the publications supporting the status of watercress as a superfood.

Get to know the largest grower of watercress in the world.

There is as much a fine art as there is a science to growing watercress. See how one company has made growing the best in baby leaves their mission since 1870 visit B&W Quality Growers